NJ is cleaning up single use plastics with the"bag ban"

This past  November, New Jersey Governor Phil Murphy signed the state’s most recent legislative attempt to curb pollution and address the proliferation of plastics in our environment. The new bill, S864, targets some of the most common pieces of litter seen on streets, beaches, and in parks and recreational areas, namely single use film plastic.

The restrictions for the plastic and paper bags and the polystyrene products will take effect in May 2022, while the restrictions on plastic straws begin in November 2021. New Jersey will be the ninth state to implement a ban of this sort, and many environmental groups consider this bag ban to be the strictest in the country.

The most recent version of this bill was introduced in the State Senate in January 2020 and, after extensive public debate, was signed into law by Governor Murphy ten months later on November 4. In a statement after the bill signing the Governor said, “Plastic bags are one of the most problematic forms of garbage, leading to millions of discarded bags that stream annually into our landfills, rivers, and oceans.”

Various forms of bag bans have been talked about in New Jersey for years and this ban is by no means the first of its kind to be voted on by the State Senate and Assembly. As the other legislative attempts failed, cities and towns that were in favor of the idea began taking matters into their own hands and started passing laws for their municipalities. When the now successful bill was being debated in the state legislature, over 100 New Jersey municipalities had already passed some form of restrictions on plastic bag use.

The bill cites several different ways that plastic products in general disrupt and damage the ecosystem well beyond just being litter and makes a point to say that some of the parts of the environment that are detrimentally affected are also major facets of New Jersey’s economy. The governor and those who sponsored the bill have said in no uncertain terms that this is about responding to climate change and moving toward more sustainable practices.

In her own statement, Bayshore President and CEO Valerie Montecalvo voiced her excitement about the development, saying, “Governor Murphy’s signing of the plastic bag ban bill represents a milestone in the long fight against single use plastics by New Jersey’s environmental community. It is a critical first step in addressing the estimated 300 million tons of plastics manufactured by industry annually, where significant quantities, mainly in the form of microplastics, enter our oceans and threatens fish and wildlife, as well as public health. Even bolder mandates lie ahead as the world grapples with plastics in the context of the fight against global climate change.”

Montecalvo rightly asserts that bolder mandates will be needed to solve the crisis, but recognizes and complements the New Jersey environmental community in this significant legislative victory that should be celebrated. The bill and legislative sponsors acknowledge that it is a first step in fighting a crisis that will continue to evolve in future years and decades to come and for which no easy solution or magic bullet exists.

Beyond the above referenced environmental concerns, single use film plastic is a nightmare for recycling processors, like Bayshore.  Modern “Class A” recycling centers for curbside material use fully automated technology and machines to separate all the household items we place together in the recycling container at the curb.  During high speed operations, film plastic routinely clogs processing machinery which requires stopping operations often several times per shift to cut out and remove the film plastic.  This greatly affects operational efficiency and also endangers staff who perform these essential maintenance functions.  Beyond these processing concerns, plastic film often has weak markets to accept the material for reintroduction into manufacturing new products. In a nutshell, single use plastics are bad for our environment, difficult to process and recover and of very little economic or reuse value in manufacturing.  For all these reasons, New Jersey’s bag ban legislation is sound public policy and an important first step toward more sustainable materials management. 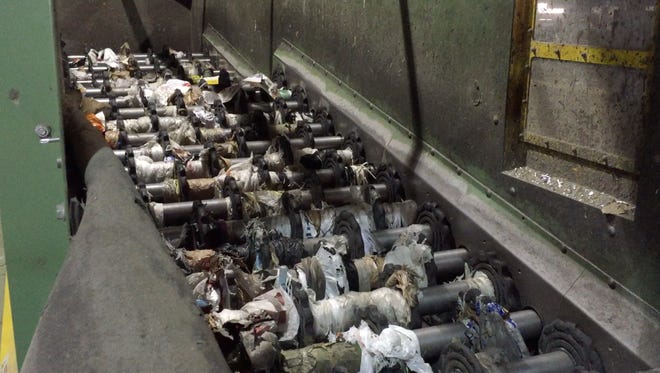 Once the new law goes into effect, important enforcement tools will become available.  Businesses that violate the rules will receive a warning on the first offense and then a fine of up to $1,000 on the second offense. All subsequent infractions will garner fines of up to $5,000 and if the offense is ongoing, a new fine will be issued every day until the business resolves the issue.

Municipalities will receive 30% of the money from these fines while the other 70% will go into the Clean Communities Fund.  For the past 35 years, the Clean Communities Program has funded litter abatement efforts in New Jersey communities and generated relevant statistical information, all of which shows single use plastics as being the primary source of litter. The fund will also provide monies to the New Jersey Department of Environmental Protection which will go toward organizing state-wide educational programs, relevant public service announcements, and distributing free reusable bags to communities.

The bill also sets up the Plastics Advisory Council within the DEP, which will monitor the implementation of the bill, evaluate its effectiveness, and report to the governor and state legislature. The council will also be tasked with studying and reporting on various issues related to plastic waste.

While consumers may only notice the bill’s effect through the absence of bags and straws, the additional measures illustrate how S864 is a robust and conscientious step toward sustainability in the public, the state, and the world’s best interest.

Former Acting Administrator of the EPA and current New Jersey DEP Commissioner Catherine McCabe hailed the bill’s success, saying, “From our cities to our shores, single-use plastic bags unnecessarily litter New Jersey’s most treasured spaces and pollute our ecosystems. By banning single-use plastic bags, Governor Murphy and our legislature continue to make New Jersey a national leader in environmental protection and the DEP stands ready to implement these new measures and educate the public.”